During the workshop we will explore how an actor can use the etude method as a tool to achieving psycho-physical truth on stage.

Etude as a part of scene work: In the second part of the workshop, we will explore how an actor can use the etude method to bring a scene to life. 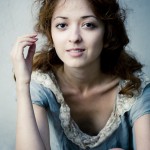 Roxanna Kadyrova is an NYC based actress originally from Moscow. After graduating from Russian Academy of TheatreArts – GITIS, and working on a several tv series and theatre productions in Russia, she moved to New York City. Her most recent project was a production of Chekhov’s 5 major plays fused together produced by New York Film Academy.