In this post, guest blogger and Moscow Art Theatre School Summer Intensive Alum (2009) Raphael Schwartzman tells you what this program meant for him. 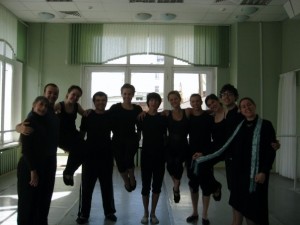 One of my clearest memories [of the MATS Summer Intensive] is of being so wonderfully sore after my first movement class.  The performance training we received, which included Droznin movement technique, yoga, acrobatics and ballet, was demanding physically and mentally in a way that I hadn’t usually experienced back home.  I had to learn to move with parts of my body, in rhythms and isolation, that I had never done before, and this woke me up to how important it is for actors to train their body like an instrument, in the same way that dancers, musicians, and athletes do.  I also got the chance to run across a wall and try to flip off of it, which was challenging and frightening and unbelievably fun. 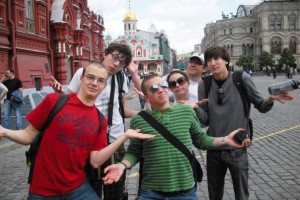 I saw as much theatre in a month in Moscow as I do in a year in the United States.  Every single show was evocative and visually stunning.  Even though I don’t speak enough Russian to follow the dialogue, the actors’ performances and the stage design are so compelling and attention-grabbing that it is impossible to look away.  It’s even possible to figure out the general plot of the play because the actors are so specific and clear with their bodies and voices. 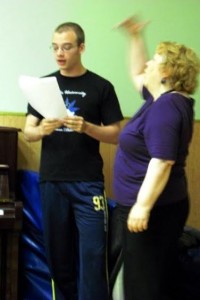 One experience that I had in Moscow that has stayed with me is the incredible quality of the diploma show done by the third year students at the Moscow Art Theatre School.  It was a series of short scenes that the students had created themselves which included performing as animals, puppets, celebrities, and in extreme situations like sky-diving and fire-fighting.  Even though there were minimal technical elements, and the actors almost never spoke, the scenario and the progression of the characters were so clear and moving.  The scenes were simple, subtle, and extraordinarily powerful because they were so detailed.  The students had been working on these scenes for the entire three years that they had been in school.  This is common for actors in Russia to do, where they will perform multiple shows in rep for years.  This level of commitment and passion was formative for me as an artist, even though we only got to experience it for a short time.

I try to bring that perspective with me into the theatre work that I do here in the United States.  These students could work for so long on these little performances and continue to refine them, to find more details, more questions to explore.  In the US we only ever have a few weeks to put up a show, so it was extremely valuable for me to see what could be made when the right amount of time is invested. 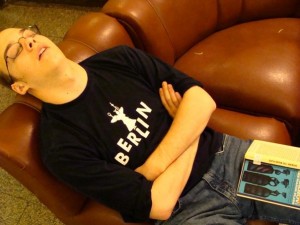 I would recommend this program to current students (or anyone who has the opportunity) over and over again.  The training is superb.  The opportunity to experience the culture is priceless, and the perspective that it offers is eye-opening.  In Russia, there is a deep-seated respect and need for theatre that is ingrained in the culture.  We struggle with this outside the artistic communities in the US.

Raphael Schwartzman graduated from Butler University with a BA in Theatre in 2011.  He currently lives in Chicago where he works as a director, actor, designer, and educator.