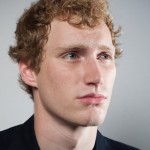 This post is by guest blogger and MATS Summer Intensive 2014 alumnus, Brendan Thompson. Originally from Alberta, Canada, Brendan has been living and working in Moscow for the past year. He is an actor, director, and playwright who loves literature, hockey, and pizza. You can read more about his adventures in Moscow here.

My first experience in a supermarket in Russia was a terrifying one. When I arrived last year I was taken to Ashan (actually French owned), a store that is like Superstore, but if it were the Autobahn. I have since become much better at navigating grocery stores, and have also made some observations.

I’ve noticed that Russian food, in supermarkets at least, seems to have fewer preservatives and chemicals when it comes to the essentials, like milk, eggs, dairy products, and fresh produce. This is both good and bad.

On the one hand the produce is fresh; tomatoes aren’t abnormally large, there isn’t a waxy substance around your apples, the vegetables look like they were literally pulled out of a garden, put directly onto a truck and brought to the store. Nobody sprayed them with chemicals, no one gave them any growth hormones, or whatever other wonderful things are done to our produce in North America.

On the other hand the vegetables look like they were literally pulled out of a garden, put directly onto a truck and brought to the store. Were they cleaned? Clearly they were not because they are often still covered in dirt. That’s probably fine, but it is interesting to note. It also means that the produce, the milk and often the meat goes bad quicker than in North America. Our refrigerator is often the victim of something we left for a day or two too long. Grocery stores, the bigger or cheaper ones anyway, are not always as quick to replace old produce so old, not quite rotting, food is sitting out, sometimes with swarms of fruit flies that need to be shoed away.

There does seem to be a greater appreciation for fresh food from the people here, from what I can tell in talking to people. I would argue that this leads to healthier diets, but what do I know? There are always many farmers’ markets selling fresh fruit, berries and vegetables on certain days of the week.

At first glance the majority of supermarkets are not too different from the average Canadian grocery store. You can buy snacks, chips, vegetables, dairy, meat, bread, etc. There is one popular item I’m very grateful is popular here. One of my most glorious moments upon arriving in Russia was coming around a grocery store aisle and going “Hey Nutella! Nutellaaaaa!!!!!” (That’s from a play right?)

The details are a bit different though. Salsa is often absent because the Russians are not big on spicy food. When I order spicy food I am often warned that it is spicy and what I am given is usually “mild” to “not spicy” (I pity the few Mexicans living in Moscow).

The chip flavours are slightly different, crab being a big hit. The pop is different, root beer is absent (my girlfriend didn’t even know what that was), and something called kvas is present. It’s not really pop, I would describe it as what would’ve happened had the inventors of Coca-Cola made it not as fizzy, slightly alcoholic, and bread flavoured instead of caramel (yeah, that’s right, Coca-Cola is caramel flavoured). Peanut butter is very difficult to find, but I did it once. Maple syrup, and syrup in general, is not really a thing, but select stores have it regularly.

The dairy section is a bit more diverse. They have their own versions of things. Buttermilk is hard to find, but there’s something called “kefir” (key-FEAR) which tastes mostly like if buttermilk was thinner and you were supposed to just drink it straight. “Tvorok” is cottage cheese though less… runny? Liquidy? There is also a wide range of butter, spreads, cheeses, etc. Skim milk is not a thing, except at a few grocery stores. Even 1% is difficult to find, the norm being 2-3.5%.

Seafood is also popular, herring being one of my new favourite fish. It comes in a plastic dish and is drenched in fish oil and you just eat is straight. I like to have it with seaweed salad (morskaya kapusta, which literally translates to “cabbage of the sea”). You can get all kinds of fish, crab and lobster. My friend mentioned that in one restaurant he went to, one of their finest dishes was “Canadian lobster”. Nice job, Maritimes!

Finally, getting out. You will pay less for your groceries in Moscow if you stick to the essentials. Bread can be as cheap as 70 cents a loaf. I think I pay about half as much for fresh produce as I do in Canada. Brand name things are probably comparable.

I have not seen a self-checkout from what I can remember. This makes things less frustrating, but more personal. If you don’t speak Russian, the cashier may not be happy with you. The cashier is, however, sitting down. What!? I feel like this would make many employees in Canada much happier and is a much more reasonable system than having them stand all day just to scan things. Maybe I’m wrong.

Anyway, grocery stores in Russia. The same. But different. Thanks for reading.