This week was the busiest, and arguably the most exciting, week yet. A lot happened around here, but this post is dedicated completely to one project. Mikhail Chumachenko has a great project that he does with all of his first year directing students and he chose to work on this project with our course: Paintings.

Each student chooses a painting. The painting must have more than one person and less than the number of people in the class in it. Each student creates a story for his/her painting, does extensive research on the work of art, artist, point in history and place the painting was made/represents, etc. The story that is created is rehearsed and the final moment of the etude must be just like the painting.

Through many classes ideas were developed and thrown out, rehearsals were had, props were made, direction and priceless feedback was given and a lot of work was done. Finally, we got to a point we never thought we would reach. Chumachenko asked for our students to put together a performance day of all seven pieces. Together, props were prepared and scenery and costumes were created from what each student had brought in their suitcases. Everyone tried to get in one final rehearsal before the presentation day, which was difficult since the average student was involved in five out of seven pieces. It was impossible to have multiple rehearsals at once.

The most amazing part of it all was the way this small class of students came together and did have seven presentations ready for the next day. The order was decided and every one worked together to set up scene after scene so that there was plenty of time for each presentation and feedback at the end of it all.

Today we are happy to share with you some notes, snapshots and points of interest from parts of the process. 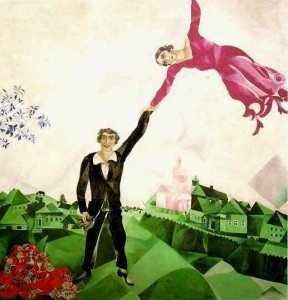 By choosing to work with this painting Iosif faced a very difficult task: how to make someone fly to recreate this image.

First he created a story about the painting which he called “Miriam.” You can read it here on his blog. He chose to leave the classroom and stage his painting outside in a nearby playground where his actors could use the playground equipment as the set, creating a solution to the task of having an actor take flight. 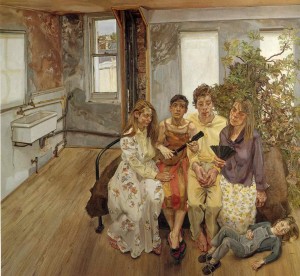 Lucian Freud painted in very long sessions. Almost no one would sit for him except his close friends and family, usually his children. He is famous for the melancholy looks on the faces of his subjects.

From this painting Emily created a story of children craving the attention of a father they rarely see. They have prepared a little show for his visit. Their mother enters, mid-rehearsal, and announces that he will not come. In this moment the happiness and energy that they have melts into the position of this painting. 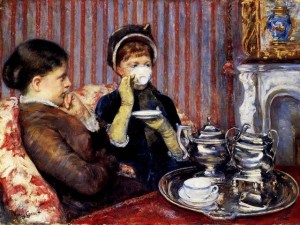 Mary Cassatt actually painted this painting for herself after she had retired. There is always something very delicate about the work that an artist does for herself. There must be a lot of truth in it.

Vasya’s exploration of this painting focused on the relationship of these women and the discomfort that can come from the truth that we hold inside.

In the story that Eliana created from this painting death is knocking on the door, but has only come to call on the man in this couple. Death comes in the form of their son who died years ago. In the middle of a day just like any other day in their very long marriage something extraordinary happened. The man answered the door and saw his son’s face again. 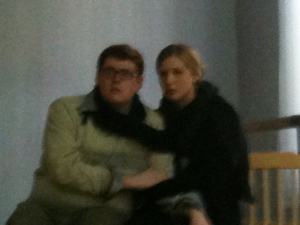 He also understood that it was time to join him. His wife, in the final moment, doesn’t want her husband to go alone. She wants to go too.

The subject matter is very difficult. It’s extraordinary to see death. To direct and to play in this surreal situation at

the end of a long life and a long marriage in your twenties is something very huge to grasp.

“Hopper painted this painting in 1929 in New York City, Greenwich Village to be exact. That was a big year. The 1920’s brought a lot of changes for the artist, his neighborhood, art, culture, politics, the nation and the world. 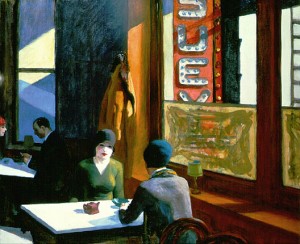 Before doing research on the painting itself my head swarmed with crazy possibilities for the situation in this painting. After doing my research I realized that the circumstances of the world Hopper was painting was far more exciting than anything I could dream up. I stripped away most of my crazy plot and focused on light, sound, and atmosphere in a simple exchange between the two women in the foreground.Hopper often paints very isolated people in public places, or rather busy places full of lonely people. My aim in this project was to create a feeling of excitement and comfort and then to take it all away leaving a restaurant full of people who feel completely alone.This project was extremely useful for me from inspiration, to research, to rehearsals, to the final presentation. Directing students were required to act and Acting students were required to direct. Everyone was working on an average of five of the seven projects. We were constantly bringing things from other rehearsals into our own to create something new.” -Greer Gerni

“Directing projects have always been very interesting to me.  I find it very difficult, but it helps me learn as an actor as well. 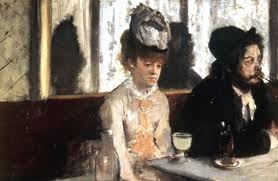 The painting project provided a strong structure, but allowed for a lot of freedom within that structure.  This process helped me to better understand the importance of knowing a piece inside and out, and being able to answer any question that might arise within that process.  When I searched for “impressionist paintings” online, I expected to find Degas, but not this specific one.  I actually thought it was Manet at first.  However, it was the story I could find inside the painting and what I could do with said story that drove me to choose it.  With two weeks I was, with my three actors, able to create something small, yet great for a starting point.  It is helpful to see all sides of artistic processes, and this specific assignment did well in helping me see those sides.” – Daniel Barnes

“The Tryst” by Jean-Leon Gerome

GITIS may be the oldest and largest theatre school in Russia, but they still don’t keep a camel in the props closet.

Jacqueline chose this set of two paintings “The Tryst (Interior and Exterior) to use to build her story. She didn’t have a camel to ride in on for this man to see this girl through the high window (maybe to steal a kiss), but she did have actors, some twine, some paper and a lot of scarves.

Instead of a man on a camel her story was about a man disguised as a camel (because, of course, that was the only way he could come near his lady’s house) and his female cousin who was daring enough to dress as a man, ride on the back of her “camel cousin” to deliver a message to the girl about when they could next meet.
“This was my favorite project so far. I was delighted that we were able to work on the project “the Russian way.” We worked in class, did our research, had our rehearsals, got feedback, did more research and more rehearsing and finished with a real presentation day. We set an order, made a program, set up scenery, props and costumes (from what we had) and presented everything together like a show. After all seven presentations we discussed everyone’s work.” – Jacqueline Vouga 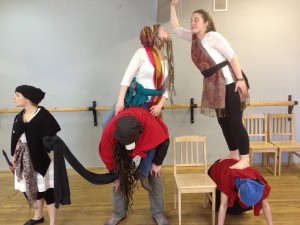 All paintings are linked to sources.