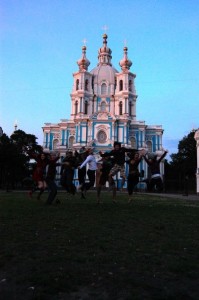 My month-long summer intensive at the Moscow Arts Theatre School was highly influential with shaping my perspective on the arts overall. During our time in Moscow and St. Petersburg, I was exposed to the highest caliber of theatre that I had ever experienced.  Although the plays were in an entirely foreign language and several hours long, the
works that we attended were by far the most engaging pieces of theatre
I have ever seen.  All elements including technical, directing, performance, etc. were presented in a professional level that is rarely if ever achieved in America.  It was amazing to be in a culture that so deeply appreciated theatre as well.  We attended Three Penny Opera at the MXAT while it was still in previews and the audience was completely full (just like every show we attended). My exposure to Russian theatre showed me that anything really is possible and theatre is so much more than the words on the page.  Those two concepts were of course presented to me at Butler by Elaina’s classes, but it was such a gift to see them fully realized and actualized in the highly professional and high achievement setting of Russia. 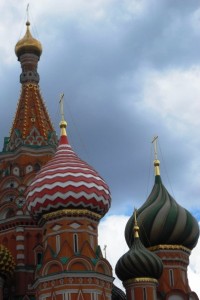 The classes at the Moscow Art Theatre School carry the same high expectations as the professional theatre and it’s clear to see the professors aim to equip students with the skills to truly master their craft.  We took classes in Acting, Ballet, Movement, Singing, and
Theatre History.  Each one stretched me and challenged me in new ways as an artist, student, and simply as an individual. In Ballet and Movement, I was challenged to move beyond my comfort zone and physically and mentally work hard.  I really appreciate in Movement being instructed by Natalia Fedorova to do the impossible. We were
directed to run on walls, jump over tables and chairs,and accomplish physical feats we had deemed impossible.  She broke down the mental limitations and unleashed new freedom in her entire class.  I had similar experiences in our Singing class, where I was pushed beyond being a beginner in voice and guided to remove previous boundaries.  I
thoroughly enjoyed our acting classes that focused on both building ensemble and achieving individual artistic growth.  Again, all these classes exemplified that the impossible was in fact possible.  That principle is definitely not a foreign idea to Elaina’s students and it so rewarding to get to experience that lesson in it’s fullest as capstone to the Butler Theatre experience.

I would definitely encourage other students to attend the program. It’s such an incredible experience to be challenged in unique ways in such a historically and culturally rich country. From my time in Russia, I have learned to dream bigger and work harder.